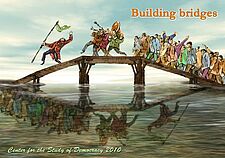 The Center for the Study of Democracy marked its 20th anniversary in 2010. Over the past two decades, CSD has established itself as the most influential public policy institute in Bulgaria. Its policy proposals targeting the most pressing socio-economic problems have regularly been implemented in practice. Through its contributions CSD has bridged academic expertise and policymaking. Often described as a “think and action tank” due to its proactive stance, the Center for the Study of Democracy has been one of the few civic organizations with a significant and long-standing impact on the public policy agenda of the country. As early as the mid 1990s, it became CSD’s mission to contribute to the public discourse on practical measures to systematically analyze and counteract corruption and organized crime in Bulgaria. Nowadays, the Bulgarian government sees the resolving of these problems as key to gaining the trust of Bulgarian citizens and its European partners. CSD has devised and successfully implemented a system of objective indicators of corruption and organized crime risk at national and European level. Thus the Center obtained the necessary empirical background to propose practical policy solutions and exercise civic control over current and strategic measures and policies.

CSD has also made significant contributions with respect to crucial socioeconomic issues at EU level. As part of their dialogue with citizens and organizations EU institutions are taking into account CSD’s recommendations when designing European policies. CSD experts have actively participated in major international and EU initiatives on key governance issues such as corruption and organized crime, trust in the judicial system, rights of victims of crimes, monitoring of racism and xenophobia, integrating third country citizens, protecting the external borders of the EU, improving the management of EU funds, and enhancing the competitiveness and innovation potential of the European Union. In this manner, the Center for the Study of Democracy has evolved from a research institute focused on the problems of transition in Bulgaria into a think tank whose expert opinion is taken into consideration more and more frequently when determining the priorities and policies of the European Union.