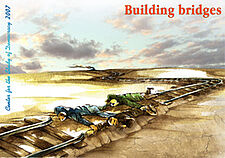 The first year of Bulgaria’s EU membership, 2007 continued to be a period of intense public and political debate on the issues at the core of the agenda of the Center for the Study of Democracy (CSD) – justice and home affairs (JHA) reform. Thus, CSD’s watchdog and policy work was of utmost relevance to the initial adjustment of the country to the requirements of membership.

As regards judicial reform, the Center continued its efforts on enhancing effective justice at border districts, as the country became responsible for several of the external borders of the EU and border crossing-related offences and customs violations already represent a problem of EU security.

In the field of policies against organized crime, CSD launched a major analysis of the main black markets. The Center’s report was one of the farthest-reaching studies of organized crime in Bulgaria analyzing the latest trends and manifestations - or market niches - of syndicate crime and its particularly damaging effects, and offers a historical review of the facts and available expertise in the area to draw conclusions about the origin, characteristics and developmental features of organized criminality in Bulgaria. For this purpose information from all available sources has been used and analyzed through several, complementary methods. Collecting empirical data about clandestine and hidden markets is a hard task, which can sometimes put the researchers at risk. The publication also enhanced public-private partnership in expert knowledge exchange as a main research approach favored by the Center.

Analysis of crime trends was pioneered by CSD in the beginning of the decade and was institutionalized through the National Crime Surveys (NCS) carried out by CSD on an annual basis. The NCS is now the authoritative source of data and analysis of the dynamics of conventional crime in Bulgaria.

As regards the latter, developing the infrastructure for public-private partnerships was in the spotlight of CSD’s advocacy efforts to promote policies for countering corruption risks and improving Bulgaria’s capacity to manage EU Funds. In 2007 CSD published an overview of best international and European practice on public-private partnerships, which aided its efforts on increasing the private sector participation in the policymaking process on raising public awareness on the importance of PPPs.

As a follow up, CSD worked on sharing the Bulgarian corruption benchmarking experience for the benefit of the future EU efforts in this area. CSD’s initiative for the adoption within the EU of a common corruption benchmarking methodology, promoted in 2007 in cooperation with government and non-governmental partners, argues that diagnosing the state of corruption and obtaining reliable information about its dynamics are crucial to the implementation of successful prevention and control policies, including within the EU itself.