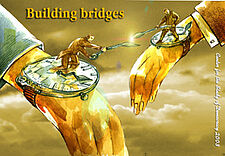 The Center for the Study of Democracy seeks to pioneer difficult reforms and provide vision as to the future challenges facing Bulgaria and Southeast Europe. CSD’s strong institutional capacity has opened new avenues and areas where civil society can make a contribution to reforms. Over the years, CSD has taken the lead in advocating key reforms in areas such as the regulatory framework for non-profits, establishment of the ombudsman institution, the introduction of anti-smuggling policies and other areas.

In addition to being the year of NATO membership and completion of EU accession negotiations, 2004 also marked the transition to a new institutional environment in Bulgaria. Some of the key economic reforms have been put place, while others, notably judicial reform and measures against political corruption, are still to be implemented. CSD has taken the lead in 2004 both areas by proving a comprehensive overhaul of institutional and legislative reforms in the field of good governance over the past seven years. The purpose was to take stock of the reforms in place and chart the mid to long term horizon of remaining challenges.