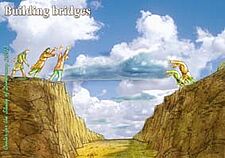 Since its establishment in 1990, the Center for the Study of Democracy has sought to pioneer difficult reforms and provide vision as to the future challenges facing Bulgaria and the Balkan region. CSD’s strong institutional capacity has opened new avenues and areas where civil society can make a contribution to reforms. Over the years, CSD has taken the lead in advocating key reforms in areas such as the regulatory framework for non-profits, establishment of the ombudsman institution, the introduction of anti-smuggling policies and other areas.

As the international understanding of security has been developing to include now areas such as corruption, terrorism, organized crime, trafficking and smuggling, CSD has turned its attention to the governance of the security sector. This is an area of particular relevance in the process of joining the European Union and NATO. Bringing the civil society perspective to these issues is particularly timely as the ramifications of the new security threats go beyond the area of law enforcement. Thus, CSD’s overall contribution has been to bridge the democracy and development agendas, on the one hand, and the security agenda, on the other.

The Center is also expanding its public-private cooperation approach to these issues. In 2003, CSD contributed to the shaping of the new security agenda in Southeast Europe. Its high profile international conference in September, brought together the NATO Secretary General Lord Robertson, representatives of international institutions, the ministers of defense and interior of the SEE countries and civic leaders in a discussion of the future security risks facing the region.

CSD’s increasing impact in the field of justice and home affairs was evident in the development of the first comprehensive analysis of the consumption and distribution of drugs in Bulgaria. By combining its monitoring and analytical capacity, CSD presented to the Bulgarian and international community a snapshot of the prevalence of drug use and the mechanisms of the organized criminal networks which distribute narcotics in the country. Since its publication, CSD’s study of the drug market has been a constant source of authoritative reference by government officials and investigative journalists.