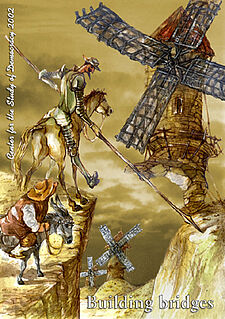 The year 2002 has been important and successful for Bulgaria’s aspiration to become a member of NATO and the European Union. An invitation to join the Alliance and a clear road map for EU integration came as a result of years of sustained government effort and wide public support. What became nonetheless apparent was that to undertake the obligations of membership the country needed a significant improvement in the capacity to apply the law. Thus, CSD’s focus on the linkages between the rule of law and a number of soft security issues was again at the forefront of transition reforms.

Five years ago CSD began to promote a new public-private cooperation approach to one of the key rule of law areas – anti-corruption. In 2002, the main outcome of its leadership - Coalition 2000, one of the most successful anti-corruption initiatives in a transition country – looked back on a number of achievements. Having influenced government policy, enhanced public intolerance and helped Bulgaria improve over 20 points in its international corruption ranking, in 2002 the Coalition laid out the strategy for its work during the next several years. It now covers a wide range of areas including the informal economy, judicial and administrative reform, and corporate governance. Asign of its international impact was the growing number of requests for exchange of best practices from countries from the NIS, Southeast Europe and other regions.

One of the crucial factors for the sustainability of anti-corruption measures is security sector reform. CSD started to develop its expertise in this area a few years ago and now combines policy analysis with practical support measures. The Center’s seminal analysis of the origins of cross-border crime and corruption in Southeast Europe was carried out as part of its effort to promote public-private cooperation in the framework of the Southeast European Legal Development Initiative (SELDI).

Reducing the size of the gray economy is indispensable for establishing a functioning market economy and reducing corruption pressure. CSD initiated a process of building of a network of experts, policy makers and think tanks in Europe actively involved in studying and drafting policies to counter informal economy. Two international conferences were held in April and November 2002 to strengthen the network and discuss results of academic and policy research.

Since 1998, CSD has been the main proponent of the establishment of an ombudsman institution in Bulgaria. Law drafting and public awareness have been among its key achievements in previous years. In 2002, the Center focused on the development of ombudsman offices at the municipal level. As a result of awareness and advocacy activities, more and more representatives of the civil society and local authorities agree that the effectiveness of the existing local ombudsmen and the successful establishment of new ones will increase the transparency in the work of the administration and the decision making process at the local level. It is expected the future national ombudsman to work successfully for protecting human rights, preventing cases of maladministration and abuse of power and serve as a mechanism for combating corruption.

Another key CSD initiative in 2002 was the promotion of registry reform in Bulgaria. Aiming to improve the business environment in Bulgaria and prevent judicial corruption, a CSD task force developed a feasibility study on the opportunities for reforming the system of official registers in the country based on a comprehensive research and analysis of the situation in Bulgaria and the best practices implemented in other countries. CSD’s effort is aimed at encouraging a wide public and expert debate for developing the overall concept of the registration reform in Bulgaria.