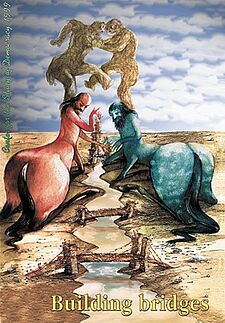 In this changing environment CSD was able to participate more effectively in Bulgaria's reform process, contributing especially to the government's economic policy-making effort. The year's highlights included, among other achievements, an increased capacity of the CSD Economic Program to identify crucial areas of reform and mobilize broad public support to such priority issues in the country's economic agenda as the development of small- and medium-sized enterprises (SMEs) and capital markets.

1997 was also the year in which CSD was established as the leading Bulgarian NGO with a strong record of policy analysis in the field of European integration. Based on the research findings of several projects commissioned by the Ministry of Foreign Affairs CSD prepared eleven policy papers in major areas of Bulgaria's accession strategy to the EU: from democratic institution building and rule of law to capital markets development, regional cooperation and the environment. These documents, compiled in two volumes in English and Bulgarian, will be published in March 1998.

In 1997 CSD also enhanced its visibility on the World Wide Web. For think tanks and policy institutes, such as CSD, the ability to develop effective outreach mechanisms is of vital importance to ensure the impact of their policy research and advocacy activities. Recognizing the important role which modern information technologies could play in this process, CSD invested considerable effort into establishing its institutional presence on the Web.

Launched in early 1997, CSD's Internet home page (www.csd.bg) is a comprehensive guide to the Center's activities and future plans, partners and projects. It is also an archive of CSD's continuous efforts to promote the reforms in Bulgarian society since 1989. The page provides detailed information on the Center's institutional history, program achievements, series of policy publications and schedule of events.

"Going website" was for CSD an important step towards fulfilling the role of a full service think tank. The ability to provide instant online information to a practically world-wide audience strengthens the impact of CSD's projects and supports our mission of 'building bridges between scholars and policy makers'. Opening the results of CSD's work on different policy issues of the transition to democracy and market economy in Bulgaria to the general public through the Internet not only adds to the transparency of the policy process, but also allows us to receive valuable instant feedback from all concerned institutions.

At the end of 1997, CSD initiated a strategic, long-term process of coalition-building among local NGOs to promote institutional reform and the implementation of anti-corruption strategies in Bulgaria. This process attests to the increased role and stronger institutional capacity of the civil society in this country which allows it to participate more actively in areas of priority for the success of Bulgaria's reform efforts.